This last Spring I had a small sweet potato that had started growing a stem, so, as I would with any regular potato, I put it in a large container and covered it it dirt.  It grew a beautiful crown of leafy stems and appeared to be doing just fine, so I watered it and let it do it's thing.

A few days ago, I finally got around to getting the potatoes out of the container. After all, I had dug up the regular potatoes some time ago. 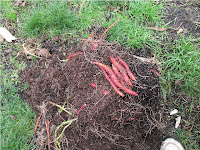 I was a little shocked when I dumped out the container to see how compacted the poor potatoes had grown and there were tons of them in there.

Unfortunately, the ones that appeared actually edible, were only the size of the average carrot or less (mostly less). 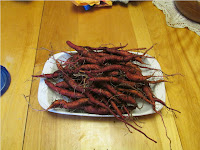 Not letting the size be a deterrent, I brought them inside and decided that with a little butter, brown sugar, and honey they could still be a pretty darned tasty as a side dish.

I didn't have the time, at the time, to wash them up and take off the little roots, so I put them on a plate and shoved them into the fridge to deal with on a different day.

Last night, I was perusing some books that had arrived a few days earlier. In one of the books (a magazine actually), by Mother Earth News, was an entire article dedicated to the growing and harvesting of Sweet Potatoes.

Apparently, Sweet Potatoes are generally considered to be a Southern crop, where it is warmer.  I, of course, live in the Northern USA.  But, you can still grow them here.

I learned from this article that... hmmm... I did very little right for growing, harvesting, and storing this tasty tuber!

Sweet potatoes don't seem to mind whatever you plant them in but they prefer light, sandy soil.  (Mine were planted in the same dirt as all the other stuff I planted -  who knew? ha ha)

They like a sunny location.  They like it hot and they like regular watering but not flooding!  Excessive rain/watering will slow them down, but not necessarily harm them.

Soil temps need to be above 50 degrees at all times due to "chilling injury" from shivering! (What???)  At 60 degrees, the metabolism of the plant slows to near zero, meaning it doesn't grow. So they need to be warm for them to grow.

You can "preheat" your soil by covering it with a sheet of clear plastic in the late Spring.  It is important that the sides of the plastic are tucked into the dirt it is supposed to be warming. The plastic needs to be taut and laying on the dirt so the warmth doesn't escape.  If done properly, it will be too hot under the plastic for weeds to grow.

For those of us in the North, at planting time, leave the plastic on the bed, cut an 8" slit in the plastic where you intend to plant, press the soil down to make a bowl shaped depression about a foot in diameter with the slit in the center. Plant your potato slip (I'll tell you what a slip is shortly) in the bowl you just made through the slit. Place sand or very fine gravel on top of the plastic where you're "bowl" is. This seals the slit and allows water to make it to your plant.

Now, admittedly, I did not make a "slip"... I just put my piece of sweet potato, that had the sprout growing, into the dirt and covered it up with more dirt. It had many many babies! But, according to the article, you should make these slips by putting the sweet potato into water to produce the sprouts.  The sprout, not the tuber piece, is what is supposed to be planted. The sprout is to be snapped off the tuber and planted, then watered with warm water immediately after planting it.

Sweet potatoes are alive and breathe.  After harvesting, don't store them in a sealed plastic bag as they will end up poisoning themselves from the gas from their respiration.  Paper bags or boxes are ok. The temperature should also be 60 degrees.

When you dig them up, they appear firm, but they will bruise very easily and spoil within a relatively short time.

Sweet Potatoes are tropical plants and at a temperature of 50 degrees they will start to "shiver". After one day in the fridge, the once living, breathing veggie will die. It will remain a good-looking corpse for a few days, but then develops pock marks and a hard core.

Sweet Potatoes need to be cured, starting on harvest day. To cure them, they need to be kept in 85 - 90 degree heat for 5 days.  During that time it will grow a second skin and seal itself. After curing you can leave it laying around the kitchen for several months.  Without curing, it will only last a month or two in storage. Curing also enhances the flavor development.  The "curing space" should also have 80 - 90% humidity for best results.

A newly dug sweet potato is virtually tasteless. It doesn't reach it's flavor peak until it has been cured and then stored for a few months.  (Note: This morning, after reading this article late last night, I got the little orange corpses out of the fridge, washed one off and snapped off a bite of it. Sure enough, there was a sense of sweetness to it, but other than that the flavor was pretty much non-existent).

Harvesting generally occurs in the Fall when the ground heat reaches 50 deg or less or the leaves have received their first frost.  They should be washed off, outside with a spray from a hose or in a bucket of water as soon as harvested.
Then, cure them and store them for a month or more before you eat them for the best flavor.

I may try it again next Spring using all the tips in the article... but I'm not sure because keeping an area that hot and humid in my house in the North to get the best flavor I will have to build the taters their own little space and give them a space heater!  I'm not sure how to create that much humidity though. More research necessary.

My thanks to Ken Allan, author of Sweet Potatoes for the Home Garden, for sharing his knowledge in an easy to understand, comprehensive article and to Mother Earth News for printing it.

Top free business listing sites list in India. It helps to get online marketing solutions to promote your local business online all over India.