I recently had taken some "information" courses regarding landscaping, forest land management, designing for wildlife, and the like.  They were very interesting and prompted me to do even more research on my own on the Internet. The Tree School put on by OSU Extension Service was wonderful and had many many classes to be involved in, but they fill quickly so you don't always get the ones you want. It also had many displays and vendors as well as lunch!  The "mini courses" put on by Clackamas County Soil and Water Conservation District was equally as informative about invasive weeds, rain gardens, and that sort of thing. They will also help in controlling certain invasive species that are considered a high priority.  The SWCD's are not actually part of the county government offices, that is just where they happen to be. There is also one for East Multnomah County and probably other counties across the state.

I was surprised to learn, when I perused a pamphlet put out by the Clackamas County Soil and Conservation District that I have 6 of the 10 undesirable invasive weeds that they are concerned about, growing in my back yard in Portland. *gasp* I didn't check the Multnomah County or Metro sites to see if they also consider them undesirable, but I'm guessing they do. Unfortunately, or fortunately, none of them in my yard are the High Priority variety, so I'm on my own to eradicate them. Sadly, many of them are quite attractive and I hate to see them go! But, go they will! The Oregon Department of Agriculture and US Dept of Agriculture  are very good resources also. 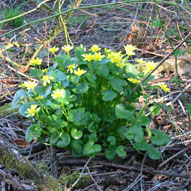 Lesser Celandine, a rapidly growing species of the buttercup family. They can be spread by seed and bulbet, forming dense patches that displace native vegetation. (Photo courtesy of Tom Forney, Oregon Dept. of Agriculture) 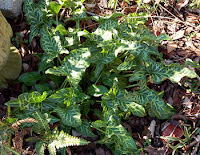 Italian Arum, an aggressive garden pest that grows from underground corms and its seeds are also dispersed by birds and mammals that eat the bright red berries in the winter.

English Holly, ornamental shrub. Seeds are spread by birds who eath the red berries. By the way, it is the female shrubs that have the berries. Eradication is difficult because they resprout following cuttings. The plants form a dense thicket making it hard for forest trees to establish. 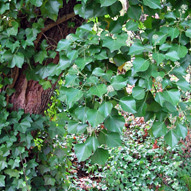 English Ivy, a serious urban pest. Ivy is capable of weighing 2100 lbs and toppling large trees once it has started wrapping itself around the tree. It takes over wherever it is and it is difficult to eradicate - I have tried! Rats and mosquitoes like Ivy, too. (Photo courtesy of Tom Forney, Oregon Dept. of Agriculture)

Field and Hedge bindweed, aka/ Morning Glory.  An aggressive climber that winds around everything in its trail. It is very hard to eradicate because all parts of this plant can root and multiply. The seeds, as well, are spread by birds. (Photo courtesy of Patrick J. Alexander @ USDA-NRCS PLANTS Database) 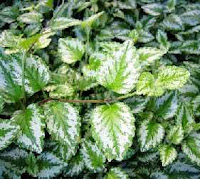 Yellow Archangel, a fast growing perennial ground cover. It sprouts readily from cuttings and root fragments making it hard to eradicate once it's established itself. Very competitive with other plants for space to spread. (Photo courtesy of KingCounty.gov)

Old Man's Beard, a perennial vine with climbing woody stems that can grow up to 100 feet long.  Fast growing and blankets whatever comes in its path.
(Photo: Jan Samanek, State Phytosanitary Administration, Bugwood.org)

Himalyan Blackberry, this European invader buries everything in its path. It can swallow up a whole car or shed if left unattended. It is not the same plant as the native creeping blackberry.  (Photo: Robin R. Buckallew @ USDA-NRCS PLANTS Database) 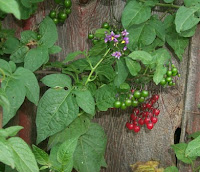 Bittersweet Nightshade,  the berries and the whole plant are poisonous to people but attractive to birds who eat them and then spread the seeds.  It dies back in the Winter months but comes back each year.
These vines can grow up to 30' into trees. It is not normally the more dominate of the weeds around it.
(Photo courtesy of KingCounty.gov) 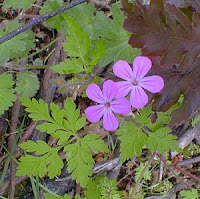 Herb Robert, aka Stinky Bob, is a wild geranium and was once a popular shade tolerant ground cover. It spreads quickly by ejecting sticky seeds 15 - 20 feet. It is very invasive and if left alone will dominate the understory of a forest. (Photo courtesy of Paghat's Garden)

Garlic mustard, shade tolerant herb, spreads rapidly and is extremely tenacious and difficult to eradicate. This pest can dominate the understory of the region's forests. It is a fairly new pest in Oregon. The seeds lie dormant for about 20 months and are believed to be viable for up to 5 years. (Photo courtesy of dnr.wi.gov) 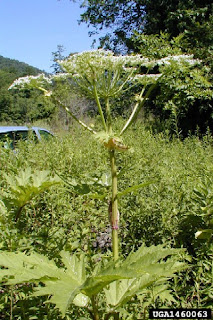 Giant Hogweed, can grow up to 20 feet tall. It is considered a public health threat that burns and scars anyone who comes in contact with its sap. At one time it was considered a garden favorite. A native of Asia, it is a monocarpic herb of the carrot and parsley family.  (Photo: Donna R. Ellis, University of Connecticut, forestryimages.org) 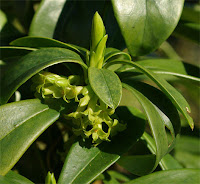 Spurge Laurel, a shade tolerant shrub grows to 5' tall.  Seeds are spread by birds feeding on the dark berries., It will choke out native vegetation and suppresses forest trees from establishing. All parts of the plant are toxic and can cause severe skin irritation. (Photo: Randy Westbrooks, USGS, Bugwood.org)

Purple Loosestrife, a perennial plant that can grow to 10 feet. Once considered a garden ornamental, it can crowd out native vegetation required by wildlife and is currently invading a number of sites in Clackamas County. It is most commonly found in wetland areas.
(Photo: Gary A. Monroe @ USDA-NRCS PLANTS Database)


There are tons more noxious weeds that need to be eradicated, lest they take over. As I said, some are downright pretty things... but you can't judge a book by it's cover!

There are several websites that have lists and pictures of noxious weeds and it has been very interesting to root around in them as I recognize many pictures as being things I have seen in one or both of my properties. Thankfully none are on the "A" list.  The main sites I have looked at for information and pictures are: