I am sad to report that Celery I died some time ago, I think I had over-watered it, but I'm not sure. It was buried in peanut butter and consumed by me. It was quite tasty.

Celery II was doing great until I put it outside in the (cheapie) greenhouse and I don't think it liked it in there at all... I think one night it froze because I put it too close to the opening where air could sift in. It might have caught a cold... or in it's case, a freeze. I laid it to rest this afternoon because it wasn't improving after I brought it back in the house. It was not buried in anything, just tossed out because it turned brown.

However, Cabbage I is still going str 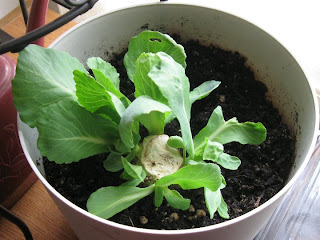 ong and it appears that each of the leaf groups is really the start of a new head.

I'm thinking that I should have divided that stem I put in the water so that there was only one nubbin on each piece. 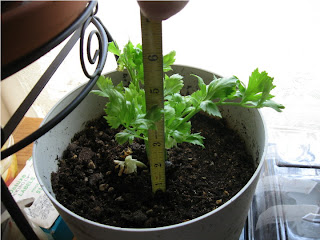 I would have never known that celery could re-grow itself until I read that article and actually tried it. Amazing to me. (Yeah, I know, I'm easily amused. ha ha)
The first celery experiment is now about 6" tall and showing some good stalk. But it's still mostly leaves right now.

You did notice that I said the "first celery"... right? *snicker* 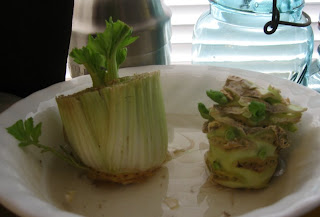 I have also started another celery, it's about 4 days old now and more than an inch tall. Just for grins, since I had just finished cutting all the leaves off a cabbage for slaw... so, I put the core in the water with Celery II... and I'll be darned if if didn't start growing too!


I've tried growing Pineapples from Pineapple tops and Avocado from Avocado seed, but neither ever grew for me.

Of course, I know that potatoes grow from the eyes of potatoes and I think Onions and garlic will reproduce themselves.

Actually, leaf lettuce you can leave in the ground and just take the amount you want off them and then new leaves will grow. I found the new leaves to be more bitter than the originals, however. But I might try it again with a different variety.

Year before last, I learned that when you cut the head off a planted Broccoli plant, two new heads will grow to replace it and I thought that was pretty neat.

Think I'll get a greenhouse started and stagger plantings of things that will regrow themselves with little or no effort on my part... then I won't have to buy them any more! ha ha

Note: these are the kinds of things some of us do after retiring :) I am also learning all about pollination and herbs. You will probably hear about that too! :)
Posted by Debbie at 8:44 AM